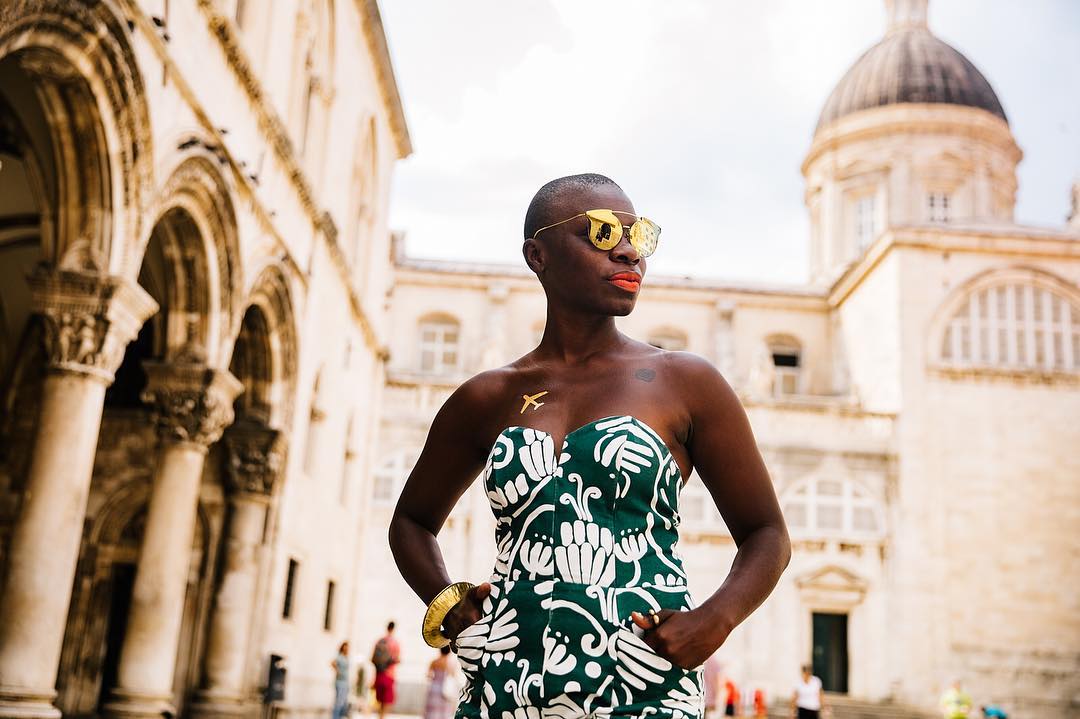 Everyone at Spherical loves the travel industry. But that doesn’t mean we don’t recognize its flaws. One of the most noticeable issues today is inclusivity—or lack thereof—across a range of hospitality and transportation businesses and campaigns.

Enter Jessica Nabongo, a Detroit-based travel entrepreneur who’s hoping to help change that through awareness. Born in the U.S. to Ugandan parents, she holds dual citizenship, and fell in love with travel early on thanks to family trips to Uganda. With a background in international development (and a master’s studying direct investment opportunities in Africa from the London School of Economics), she left a job at the UN before entering the travel space. After multiple trips to Africa, she became acutely aware that travelers—black, white, American or African—weren’t taking full advantage of the wonders the Mother Continent provided. When her friend, rapper J Cole, asked her to help plan a trip, she knew she had to get him to Africa. “I wanted to change the narrative, and he’s a man of influence.”

Planning his vacation led to Jet Black, Nabongo’s travel advisory firm that organizes luxury journeys to Africa and places of the African Diaspora. She also runs Catch Me if You Can, a popular blog and Instagram channel devoted to Nabongo’s own travels. (Side note: Nabongo has become a veritable celebrity in the travel world, thanks to her much-publicized, and nearly-completed quest to become the world’s first black woman to travel to every single country. She’s down to just 36 countries left).

Our editor, Peter Schlesinger, caught up with Nabongo—at home in Detroit for a quick two-day respite between travels— over the phone to talk about how the travel industry is shifting the conversation about diversity, and what steps are still needed. Below is their conversation, edited for clarity.

Talk to us a little about Jet Black. What made you want to start the business?

I wanted to be in a position to change the narrative of brown and black countries. So that’s why there’s a focus on Africa, Central and South America, and the Caribbean. It’s saying, “Hey, you can do luxury travel to so many countries in this region, and also you’re supporting the local economies.” A lot of these governments are looking to increase their revenues from tourism so they can rely less on foreign aid. In my little way, Jet Black is still working in development, but in the private sector.

When you’re planning these trips, how do you make a point to support the local economy?

We’re definitely putting money into the local economy. We hire local drivers, and we make sure to tip people well. When I take people around the country, we’re going to markets and things like that. But the biggest part is that I try to work with local vendors—basically the point person in the country. These are the people who are doing a lot of the bookings for hotels, safaris, and flights.

And for hotels—is it hard to find locally-owned properties?

Yeah, it’s unfortunate. In my 40s, I want to become a hotelier. So you can consider there will be lots of luxury Jessica Nabongo hotels on the continent!

Can’t wait! And in terms of luxury travel in Africa—or anywhere, really—how do you define authentic experiences when you’re staying at a five-star, foreign-owned resort?

I believe I can be comfortable when I’m sleeping, and still go to a market and sit down with people and get that $2 meal. That’s very possible for people who want to do it. A lot of people just want to go places and get passport stamps and stay in really nice hotels, but not really experience the local culture that much.

That’s kind of hilarious. Because every major hotel brand now is trying to say “we’re so much more than a place to sleep. And you make a really great point that, in reality, a hotel can also quite simply be a place to sleep.

Exactly. I mean we’ve seen the trends and the statistics. People, led recently by Millennials, really want experiential travel now. So hotels are in fact adapting and creating these great add-ons to experience local culture.

In terms of marketing: how new is it that you’ve noticed major companies, such as Delta, show diverse representation in their campaigns?

It’s very recent. I had a fallout with Four Seasons, but now we work together, and they’re working with a bunch of influencers of color—which they literally were not doing at all. Now they’re getting amazing content, and audiences are engaging with it. I feel like a lot of these brands think, “If we show black people, white people won’t want to come anymore.” First of all, if there are white people who don’t want to come because they saw a black person on your social media, then I hope you’re okay losing that customer.

And it’s not just about race. Race is obvious and easy to tackle, but it has to go beyond that. When you think about the travel industry and what we see, it’s skinny, blonde, bikini-clad girls. It’s all sorts of representation that needs to change. When I travel, I see very regular people—not just models.

Are there other brands that you see doing a great job speaking to diverse audiences?

Nothing that comes to mind. And again, I think that’s because I’m looking at luxury companies. And I’m not seeing representation to the point where I’m saying, “Look at them, they’re doing it!”

I think we have to figure out how the industry can upgrade itself, because it’s speaking to an antiquated audience right now. People need to get on board with the way the world is changing, because it’s rapid.

And on social at least, it’s so noticeable. It’s such a public forum to give a message.

Isn’t it easy? We’re not asking for much. Just show our faces. That’s it.

You’ve mentioned how travel in Africa is still a colonial experience, and that Africans themselves often don’t think about visiting other parts of the continent, let alone their own country. Are hospitality companies not marketing to local travelers?

Absolutely. I think it’s a few things. Companies are definitely ignoring the local markets. I just stayed at this place in Burkina Faso, and when I arrived, the guy was shocked. He was so happy and surprised, because he said he doesn’t see African travelers usually.

And when I go on safaris, I’m always the only black guest, and the staff is always super excited and curious, because they’re not used to seeing African guests.

Number one, is definitely the lack of marketing. But I think black Americans, and on some level many Africans, have this feeling of not belonging and not being safe. People always ask me, “Which countries are safe for black people to travel?” I always tell them, “You can go anywhere,” but unfortunately there’s this idea that that, because we get it so bad in America, it must be like that in the rest of the world.

And, for a lot of Africans who have money, there’s this drive to go to Europe, to access the so-called nicer things. They’re just not valuing African tourism in the same way that they value getting to Europe. There are so many Kenyans who go to Paris before Maasai Mara, and Kenyans who haven’t been to Lamu. It’s really about highlighting these places in a beautiful way to Africans.

And in terms of money…does your money actually go further in Paris, though? If we’re talking luxury travel within Africa…

Oh, my God. Yes, it does. This is such a freaking challenge, because that’s the argument. I tell Kenyans to go to South Africa, and they’re like, “It’s cheaper to go to London.”

Travel within the continent is really expensive. For me now, doing every country in the world, I’m like, “Damn. To go to Chad from Addis Ababa is more expensive than flying to Paris and then flying back down to Chad.” That’s crazy. Intercontinental travel is definitely expensive, specifically between regions. Once you’re trying to go from South Africa to Kenya, or Kenya to Ghana, or Ghana to Congo, then it becomes really expensive.

Is any of that shifting? Is there any sign of progress either on the marketing front or just on the infrastructure?

I am optimistic. Ethiopian Airlines is definitely changing the game. They’re becoming a huge hub. They travel to over 50 destinations on the African continent. They definitely have the most destinations.

And Ghana just relaunched an airline. So I think, the thing is we just need more players in the space. Because right now, South African and Ethiopian have the market on that. And Kenyan to an extent, in airways.

I think Ghana is a really interesting case, because the president is committed to increasing tourism. A bunch of celebrities [including Idris Elba, Boris Kodjoe, and Rosario Dawson] were there for Christmas. Now they have Afrochella. They just relaunched their airline. And they’re doing this huge thing called the Year of the Return, inviting black people in the diaspora to come. They’re piggybacking on 23andMe and all that, and really welcoming people back with open arms. It’s a great example of an African country focusing on tourism, because they know there’s a payoff.

Also, in terms of intra-African travel, Ghana now allows visas on arrival for every African country, which is hard to find, unfortunately.

Interesting. So between African countries, there’s the hassle of visas.

Oh my God, yes. I still need, I think I need, probably eight more Visas, and I have a Ugandan passport. It’s really, really frustrating.

Looking back on recent months, it feels like every major industry is grappling with big players dealing horrendously with minorities, be it sexual harassment cases or race relations fiascos. In your travels, and your conversations with fellow travelers and locals, are you seeing a shift of companies actively listening to the public outcry?

Here’s the thing. We’re still not at the table. And in fashion in particular, a lot of those brands are Italian and French. We’re definitely not sitting at those damn tables.

And often, if there is someone at the table, it’s one person who’s representing an entire race. It’s difficult for those people to speak up in those situations, because it’s their job. Do you say something and risk getting pushed out?

A huge part of my journey to every country in the world is that I am not afraid to speak up. So even what happened with Four Seasons, that alienated me with some brands. But for me at the end, it’s worth it. If one person doesn’t speak up—if I don’t speak up—who will? I feel very fortunate that I have the personality to persist despite the challenges that I face. Because what I realized is, representation is super important.